Each of our carefully researched, styled, tested and distributed collections reflects a particular aesthetic and ethos. We hope some of these speak to your own style, and help you refine and redefine your own look and style philosophy in the process. 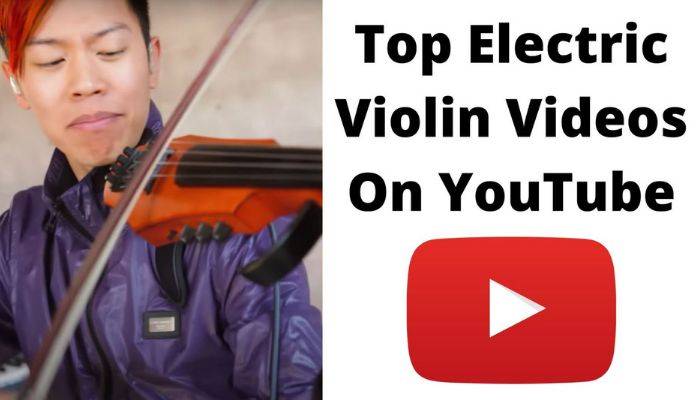 That's because the vast majority of violinists are classically trained. They are taught to play Vivaldi the way it "should" be played, as in the way Vivaldi would've played it himself 300 years ago. Violinists also join orchestras where they play the same music in the same style as every other violinist in the orchestra.

Now there's absolutely nothing wrong with that! In fact, learning the violin does require a lot of discipline and practice. And one of the best ways to become a proficient violinist is through classical training. However, there's not a lot of room for creativity compared to other genres.

Times are changing though! Especially with the music industry. Now more than ever, it's easier to experiment, get creative, and share your music with listeners.

And how are these electric violinists breaking the classical barriers of what a violinist "should" do? Through Youtube! In this article, we've compiled a list of some of the top electric violin Youtube videos, and how these musicians are exploring new possibilities for violinists around the world.

Who doesn't love Daft Punk? Their music has changed the world of electronic music. Jason does an incredible solo riff at 2:05 of the video on anNS Design CR electric violin. He was able to replicate Daft Punk's signature sound, while accompanied by his guitarist and drummer.

This video shows you the limitless possibilities and sonics you can create with an electric violin. Keep in mind though, not all electric violins are created equal. The NS Design CR has the most advanced pickup of any electric violin, and is able to deliver incredible tones through its powerful electronics.

Pentatonix, the world famous acapella group, teamed up with Lindsey Sterling to do a cover of Image Dragon's hit song - Radioactive. The music video is awesome! And Lindsey does a wonderful solo with the cellist at 1:30 of the video.

This video shows the power of collaboration. Nowadays, you've probably seen pop stars like Ed Sheeran team up with Justin Bieber, Camila Cabello, Cardi B, and more. This is a great strategy for violinists to build their fanbase by teaming up with other musicians who have their fanbase on Youtube as well. Plus the electric violin gets a lot of attention, so you're sure to get some curious listeners.

2CELLOS is the most famous modern cello duet in the world. They built their fanbase through pop song covers and energetic stage presence. Even though this video isn't about electric violins, the duet performs on electric cellos in front of 50,000 people in Croatia!

This video shows the energy you can create with classical instruments. As classically trained musicians ourselves, we never thought we'd see 50,000 people dancing to two cellists on stage! A very different energy than what classical musicians are used to.

One of the hidden gems on Youtube, Victoria Yeh plays Cosmic Messenger by Jean-Luc Ponty on a Viper electric violin. We get lost in the trance-like genre of her performance. What we found most impressive was her "looping" abilities.

Looping is a technique in which you start with one recording, and have it repeated over and over. Then you start layering additional loops one by one to create a very full and rich track. However, it's harder than it looks! Each time you record, it has to be perfectly synchronized to the time. And your pitch has to be exact. Plus you gotta know when you are looping and when you're not, such as for melodies.

This video shows the power of looping and the impressive sounds you can create through one electric violin.

In this video, Caitlin De Ville does a cover of Rockabye, by Clean Bandit featuring Sean Paul and Anne Marie. Caitlin is probably the most famous electric violinist on Youtube. Just do a search for electric violin and you'll see several videos by Caitlin. This cover alone has more than 42 million views!

Caitlin does an exceptional job of turning this song into her own style through her violin performance and choreography. This is definitely something you don't typically see within the classical music genre! So we wanted to include this video to show you how you can do something creative to make your violin cover stand out.

In this song, Angie takes a classic and remixes it into a modern soundtrack with drum beats and cool electrifying tones. What's really unique is the lit-up butterfly electric violin.

As mentioned before, electric violins still look relatively new in the world of music. Sure violinists will know it's a violin. But you won't believe how many listeners out there will see this instrument and go "wow, what is that?"

Electric violins can be very eye-catching, which is great for spreading your music on Youtube.

Tones & I (Cover) - Barbara The Violinist

Last but not least, we wanted to share this video as a source of inspiration for all violinists out there. In this video, Barbara Krajewska does a fantastic electric violin cover of the hit song - Dance Monkey, by Tones & I.

This is a tremendous opportunity for any violinist to build a following by doing covers of the most recent pop songs. Again, the electric violin itself is visually stunning, and a great attention grabber for Youtube videos.

If you're a violinist, or someone interested in learning the violin, you should seriously consider an electric violin. It's still relatively "fresh" in the world of music. But it's going to gain a lot of attention over the next few years. It's amazing to record with, it's got unique tones, it's visually appealing, and it's going to be a blast for you to play. We hope to see your video on Youtube soon! Your Guide to Choosing the Best Violin Tuners in 2022 How to Choose the Right Violin Strings

Your Guide to the Best Violin Case Brands